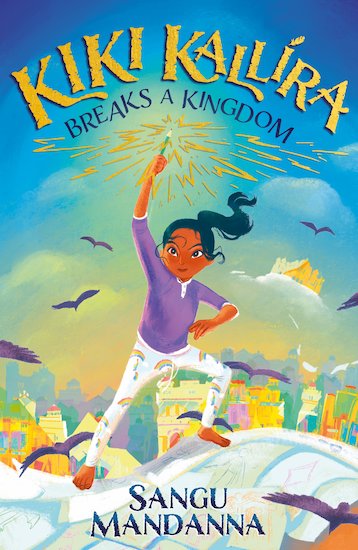 Buy this and your school gets €1.68 to spend on books Orders of €20 or more will earn 20% of your order value back in Scholastic Rewards for your school.

Kiki Kallira is more of a worrier than a warrior – but today she will learn to be a hero. The mythical beasts she loves to draw have come to life, and she is the only one who can defeat them. A middle-grade fantasy inspired by Hindu legends about anxiety, creativity and finding your own strengths. For 8+ fans of Abi Elphistone and The Land of Roar.

Kiki Kallira has always been a worrier. Did she lock the front door? Is there a terrible reason her mum is late? Recently her anxiety has been getting out of control, but one thing that has always soothed her is drawing. Kiki’s sketchbook is full of fantastical doodles of the Hindu myths and legends her mother has told her since she was tiny.

One day, her sketchbook’s calming effect is broken when her mythological characters begin springing to life and Kiki is pulled into the mystical world she drew.

There, she discovers the band of rebel kids who protect the kingdom, as well as an ancient, monstrous god bent on total destruction. Kiki must overcome her fear and anxiety to save both worlds – the real and the imagined – from his wrath.

But how can a girl armed with only a pencil defeat something so powerful?

‘A fast-paced, vivid and exciting adventure story with real heart, I couldn’t stop reading!’ – Robin Stevens, author of the Murder Most Unladylike series