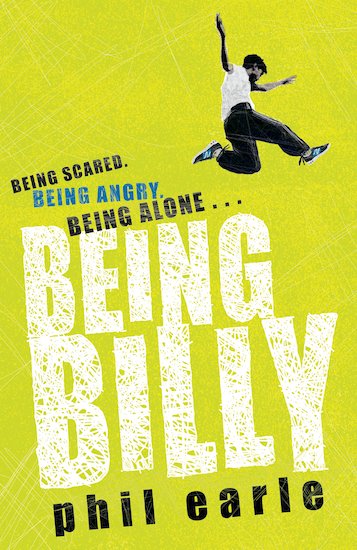 This item has 1 stars of a maximum 5

Being Billy is the award-winning first novel by Phil Earle.

Faces flashed before my eyes. And for every face there was a time that they had let me down. Each punch that landed was revenge, my chance to tell them I hadn’t forgotten what they did.

Eight years in a care home makes Billy Finn a professional lifer. And Billy’s angry – with the system, the social workers, and the mother that gave him away.

As far as Billy’s concerned, he’s on his own. His little brother and sister keep him going, though they can’t keep him out of trouble.

But he isn’t being difficult on purpose. Billy’s just being Billy. He can’t be anything else.

‘Phil Earle writes starkly but sensitively about damaged children in this brilliant page-turning novel. It moved me to tears’ – Jacqueline Wilson

‘Being Billy was a total page-turner – authentic and gritty. Billy’s voice doesn’t falter . . . spiky, brave and compassionate’ – Jenny Downham, author of Before I Die

‘Moving and powerful, I loved it’ – Sophie McKenzie

Phil Earle was born, raised and schooled in Hull. His first job was as a care worker in a children’s home, an experience that influenced the ideas behind Being Billy. He then trained as a drama therapist and worked in a therapeutic community in south London, caring for traumatized and abused adolescents.

After a couple of years in the care sector, Phil chose the more sedate lifestyle of a bookseller, and now works in children’s publishing. Phil lives in south-east London with his wife and children, but Hull will always be home.

790L Lexiles are the global standard in reading assessment. They are unique as they are able to measure a child and a book on the same scale – ensuring the right book gets to the right child at the right time.