They Wish They Were Us (the gripping, read-in-one-sitting new murder mystery) 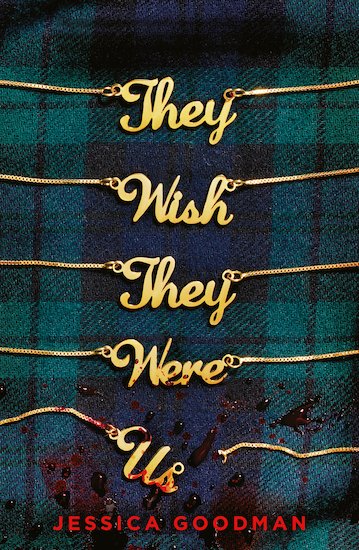 Gossip Girl meets One of Us is Lying in this tense, taut, unputdownable murder mystery. In Gold Coast, Long Island, everything from the expensive boutiques to the manicured beaches, to the pressed uniforms of Jill Newman and her friends, looks perfect. But as Jill found out three years ago, nothing is as it seems. Jill’s best friend, the brilliant, dazzling Shaila Arnold, was killed by her boyfriend. After that dark night on the beach, Graham confessed, the case was closed, and Jill tried to move on. Now, it’s Jill’s senior year and she’s determined to make it her best yet. After all, she’s a senior and a Player – a member of Gold Coast Prep’s exclusive, not-so-secret secret society. Senior Players have the best parties, highest grades and the admiration of the entire school. This is going to be Jill’s year. She’s sure of it. But when Jill starts getting texts proclaiming Graham’s innocence, her dreams of the perfect senior year start to crumble. If Graham didn’t kill Shaila, who did? Jill vows to find out, but digging deeper could mean putting her friendships, and her future, in jeopardy.

Our March 2021 Teen Book of the Month

My YA March Book of the Month has to be They Wish They Were Us. Set in an elite American private school, Jill Newman and her friends are the most popular, envied students in school. They’re also Players; members of an exclusive no-so-secret secret society, that host the best parties, get the best grades and have the brightest futures ahead of them. But not all is as it seems, as an anonymous text reveals to Jill that her best friend wasn’t murdered by the boyfriend who confessed three years ago, but someone else…

This gripping debut from Jessica Goodman is already a bestseller in the US, and it’s easy to see why. You are guaranteed to read this murder thriller in one sitting as you race with the characters to solve the mystery before it’s too late. With an added edge of feminism and classism, They Wish They Were Us is so much more than a “whodunnit”. Perfect for fans of Karen McManus’s One of Us is Lying and Holly Jackson’s A Good Girl’s Guide to Murder. Read the book now ahead of the series The Player’s Table coming next year, with Halsey making her screen debut!