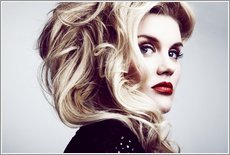 Emerald Fennell appeared in Any Human Heart, the adaptation of William Boyd’s bestselling novel. She recently played Princess Merkalova alongside Keira Knightley and Jude Law in the film version of Anna Karenina and appeared in Blandings and Call the Midwife over the winter period. She is currently filming Murder on the Homefront, a period crime drama for ITV.

At the age of 27, Emerald is now taking on the male dominated world of horror fiction with her debut novel Shiverton Hall. Originally conceived as a television script and infused with her love for horror, Emerald has created a scary and thrilling novel for young readers. Emerald Fennell was picked up by the same editor at Bloomsbury who worked on the Harry Potter novels, a sign that she is definitely one to watch in 2013.

I’m the King of the Castle by Susan Hill

Poor young Charles has to go and live in the decaying stately where his mother is the new housekeeper. Unfortunately for him the son of the house, Edmund, takes an instant disliking to him, and torments him in increasingly cruel and inventive ways. I read this as a grown up and it chilled my blood for days. A perfect depiction of childhood fear that is as clammy and irrational as the real thing.

When I was a child I was given the book tape of these ghost stories. I put them on before getting into bed and was then too terrified to get out and turn them off. These some of the best and scariest stories in the world and they are particularly good at Christmas time, which was when James wrote them.

The Twits by Roald Dahl

Even though it may not be as traditionally scary as The Witches, The Twits completely freaked me out. The Twits are two of the most grotesque villains in children’s literature. Mr Twit’s beard alone, filled with chunks of corn flakes and stilton, is enough to give one a life-long fear of beards (which was Dahl’s intention all along).

A psychotically terrifying book of cautionary tales, complete with vivid, nightmare-inducing illustrations. One child plays with matches and burns to death, another starves to death, and yet another is blown away in a storm. There is also a man who chops off the thumbs of thumb-sucking children with a giant pair of scissors. Why, Mr Hoffman? WHY?

The Gashlycrumb Tinies by Edward Gorey

“A is for Amy, who fell down the stairs, B is for Basil assaulted by bears.” Gorey’s hilarious and macabre alphabet book is one of my all-time favourites. You will find yourself cackling with laughter as each adorable child is done-in in a variety of horrid ways. I’ve always felt particularly sorry for poor Fanny, who is sucked dry by a leech.