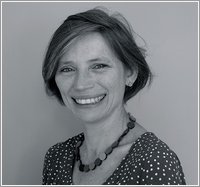 Lydia Syson is a fifth-generation North Londoner who now lives south of the river. Although writing a novel was a very early ambition, it took her rather a long time to get round to A World Between Us. In the meantime, she went from being a World Service radio listener in Botswana to a producer in London, leaving the BBC after her first child was born. Three more children later she wrote a biography of Britain’s first fertility guru,Doctor of Love: James Graham and His Celestial Bed, telling the full story of the charismatic eighteenth-century ‘electric’ doctor. Getting to Timbuktu is still on the ‘to do’ list – explorers, poets and Timbuktu fever were the subject of the PhD she finished in 2003 – but the current humanitarian and political crisis in Mali makes that unlikely for some time. This year’s travels have been closer to home: her next YA novel for Hot Key Books is set mainly on Romney Marsh.

What inspires your writing?

All kinds of things…places, people, things I’ve read, my family, my friends, exhibitions…it’s hard to pin down, but there often seems to be a kind of serendipity at work once I get going on an idea. Everything suddenly seems to link together, and point to a particular direction, and then I get a sense of how it’s meant to be. But as a starting point, I find setting very important. Not that I necessarily have to go to a particular place – having lots of children makes it hard to get away for very long at a time! I do a lot of mental travelling, in both space and time.

How did you first become an author?

I wrote a lot as a child. I had some lovely teachers at primary school who used to give me extra exercise books for my stories, which was great. As a teenager, I had a loose floorboard in my bedroom where I hid my unfinished novels and diaries. Then I did an English degree and became very theoretical and gave up writing stories for years, but I did had a lovely time using words and narrative in a different way as a features and arts producer making radio programmes for the BBC World Service. Eventually, after I started having children, I did a PhD about Timbuctoo (which started as an idea for a radio series), and that led me to writing a book about an eighteenth century sex doctor called James Graham who invented an electrical, magnetic, musical ‘Celestial Bed’ to help women have lots of wonderful babies. He was extremely progressive in lots of ways. I began writing fiction for young adults when I had so many children myself it had become hard to get to libraries for research.Easier to make things up? Far from it. Writing historical fiction for teenagers is about as challenging as it gets. And I still can’t keep away from libraries.

What was your earliest career aspiration?

I always have wanted to be a writer, as my schoolfriends will testify, though I (very) briefly flirted with the idea of being a farmer. I thought about agricultural research for a few weeks and then realised it had more to do with science than striding across fields. Actually I hate to think now what it might have involved. I haven’t really got my head round the ethics of GM.

What advice would you give to budding writers?

Read a lot, write a lot, and read what you write out loud. It’s the best test. Be brave. Don’t stop. And you should probably take what you’re taught at school about how to write with a large pinch of salt. Look at your own favourite writers and see if any of them follow those ‘rules’.

What was your favourite childhood book?

Hard to narrow down. My favourite writers were Joan Aiken, E. Nesbit, K.M.Peyton, Jane Gardam and Geraldine Symons. I absolutely loved Miss Rivers and Miss Bridges (though now I admire Mademoiselle even more), and also Black Hearts in Battersea. I read Arthur Ransome repeatedly, though I was hopelessly unsporty and had never set foot in a sailing boat. I read The Hundred and One Dalmations and Jane Eyre more often than any other books, I think. (I also adored I Capture the Castle.) Noel Streatfeild, Tove Janson and Geoffrey Trease are three other big favourites from childhood. Some of the books I’ve most enjoyed re-reading with my own children have been the Laura Ingalls Wilder books. I’d better stop!

Where is your favourite place to write?

I write a lot in bed. It’s right at the top of our house, away from things.

Who do you most admire?

People of principle. Which sounds a bit sanctimonious…oh dear. A good example, of course, are all the volunteers who defied their governments and went to Spain to try to stop Fascism in its tracks, whether as soldiers, medics, organisers, drivers, stretcher-bearers or journalists. Realistic idealists.

How do you read – print, digitally or both?