The Land of Neverendings Award-winning author/illustrator 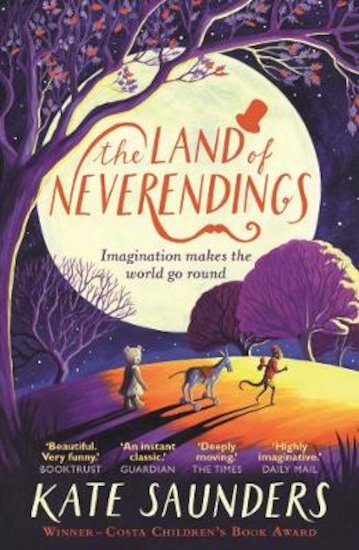 Emily watched, in a trance of astonishment, as the bear opened the picnic basket, took out a tartan rug and spread it on Holly’s bed. And then the penguin spoke. Actually spoke. ‘What’s going on? This isn’t Pointed End!’ The bear said, ‘It looks like a human bedroom. We must’ve come through the wrong door.’ ‘But there aren’t any doors to the hard world in Deep Smockeroon! And we don’t have a human bedroom any more. We’re in a box in the attic.’

What if there exists a world powered by imagination?

A world of silliness, where humans and their toys live on long after they’ve left the Hard World . . . and what if the door between that world and this one was broken?

Welcome to the Land of Neverendings.

Moving, raw and funny in all the right ways, The Land of Neverendings is a rip-roaring adventure, but it also gives an honest portrayal of grief for young readers, and shows us that whilst sadness does exist in the world, it doesn’t have to cancel out happiness, or silliness, even when you lose someone you love.

740L Lexiles are the global standard in reading assessment. They are unique as they are able to measure a child and a book on the same scale – ensuring the right book gets to the right child at the right time.