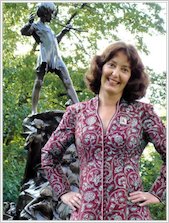 Geraldine McCaughrean was born and educated in Enfield, North London, the third and youngest child of a fireman and a teacher. She attended Christ Church College of Education but instead of teaching chose to work for a magazine publishing house. Her favourite assignments included the best-selling children’s partworks Storyteller and Little Storyteller. Only in 1988 did she become a full-time writer. Since then, Geraldine has established herself as one of the most exciting children’s writer’s today.

She often visits nearby schools to talk about being a writer and play story-making games, and, of course, to find out what the really important people – the readers – are thinking.

In 2004, the Great Ormond Street Hospital trustees launched the search for an author to write the sequel to J.M. Barrie’s classic children’s novel Peter Pan. Geraldine was chosen from over 200 applicants, and Peter Pan in Scarlet became a bestseller in 2006.

Geraldine and her husband John live in Berkshire and have one teenage daughter, Ailsa. In all, Geraldine has written over 140 books, mostly for children, as well as plays and poetry, and has been published in 25 languages.

Geraldine has won many awards, most notably the Whitbread Award three times for A Little Lower Than the Angels, Gold Dust and Not the End of the World, and the Smarties Award four times for Kite Rider, Plundering Paradise, Smile and Stop the Train!

You’ve written 140 books – where do you get all your ideas from? It varies enormously. Kite Rider came from an image – a poster glimpsed from a Tube train as it rolled through an underground station. Stop the Train came from a TV documentary about the Oklahoma Land Runs. Gold Dust came from a little snippet of news in a newspaper – a setting. So, as you can see, there is usually some grain of truth at the heart of the book. With Peter Pan of course, J.M. Barrie had done all the work for me: all I had to do was trawl through his book looking for both the big Ideas and the stray little ends of plot out of which I could knit up a new book, a partner for the first.

How did you feel when you were picked to write the official sequel to a story as famous as Peter Pan? I was terrified. Bear in mind that I had not written it yet – well, only a couple of chapters for the competition. Normally I have finished a book completely before I even show it to anyone. Suddenly this marvellous job was mine: I knew that this would be the most important book I had ever written and would be read by huge numbers of people. Worse, I knew that for the first time people would be angry about me doing it, a) because they did not think anyone should mess with a classic masterpiece, b) because they would have liked to write it themselves and had a thousand good ideas for how the story ought to go, and c) because they had loved Peter Pan since childhood and identified with Peter, or Wendy, or Tinker Bell, in a way that made them feel like owners of Neverland.

Of course I was delighted too. It is rare – unique in my experience – that you can claim a book is ‘useful’. Entertaining, yes; exciting, maybe; well written, you hope. But useful? Peter Pan in Scarlet, though, would raise money for Great Ormond Street Hospital, and I’ve never done anything that ‘useful’ before.

How did you go about writing Peter Pan in Scarlet? Did you have to do lots of research? I read and read the original until I had absorbed Barrie’s style and felt at home inside the world he created. Then I teased out stray ends of plot, as I say. I did not research Barrie’s life much (what a writer is like doesn’t matter – only what he writes), but I did want to be true to Barrie’s values. For instance, the quality he admired most in people was courage and heroism, so I made a big deal of that in the plot.

There again, I disagreed with him in two gigantic respects. I do not happen to believe that mothers ever bar the windows against their lost sons and forget all about them. Since the commission wanted me to produce a book with something new to say, that was what I set out to say: that growing up is not an utter disaster and that mothers (and fathers) never ever forget their children. Oh and I wanted to put in a word, too, for doctors and the magic of the medical profession. You can guess why, can’t you?

Peter Pan in Scarlet has been a huge success. What have you enjoyed most about that? The reviews I enjoyed most (from a professional point of view) were the ones that said ‘I thought this project was a really bad idea but actually this book turned out to be great’. It was just such a relief!

It has given me the chance to travel to all kinds of places, but that is a mixed blessing because honestly I would rather be writing books than travelling and doing talks. However, what is wonderful is that wherever Peter Pan had taken me, I have met up with people who were patients in Great Ormond Street Hospital, whose children were, whose parents were, who were nurses there, or whose friends would have died but for Great Ormond Street . . . the hospital is just such an amazing place that its tendrils reach far and wide – worldwide – and touch the hearts of thousands.

How does Peter Pan in Scarlet help raise money for Great Ormond Street Hospital? J.M. Barrie gifted his copyright in Peter Pan to his favourite charity: Great Ormond Street Hospital. That means whenever the book is published or the play is acted or a film is made, money goes to the hospital to make life more comfortable for the patients there. But the copyright expired recently, so they wanted a sequel to the book that could belong to them in the same way and go on fetching funds in to finance their work.

What is Peter Pan Week? Are you excited about it? It’s a wonderful new space on the calendar when exciting things will happen every other year (alternating with Comic Relief) in aid of Great Ormond Street Hospital. 2008 is its very first year. It is all to raise funds for the hospital, of course, and the hope is that a quarter of a million children (and adults) will take part.

How much are Great Ormond Street Hospital using Peter Pan in Scarlet as part of the fundraising campaign?Peter Pan in Scarlet belongs to the hospital. It isn’t MY book, it is theirs. If enough people around the world are interested in reading the further adventures of Peter Pan, it will make a real difference, as far as the hospital is concerned. It is a bit frightening to realise quite how much is riding on it: remember, you cannot make a book a best-seller just by hoping. But if Peter Pan in Scarlet can go on selling steadily for a good few years to come, it will serve the purpose for which it was born.

What are you planning to write next? I have written the first three chapters of my next novel (fingers crossed). At the moment it is called Anybody Else – but titles are often the last thing to be decided.

It will not be my next book out though. That will be a gorgeous picture book version of Peter Pan in Scarlet, for younger readers. I have taken out some of the more scary bits and made the sentences easier to read and the whole story much shorter. But the best thing about it – whatever your age – will be the pictures by the brilliant David Wyatt. It’s going to be fantastic.