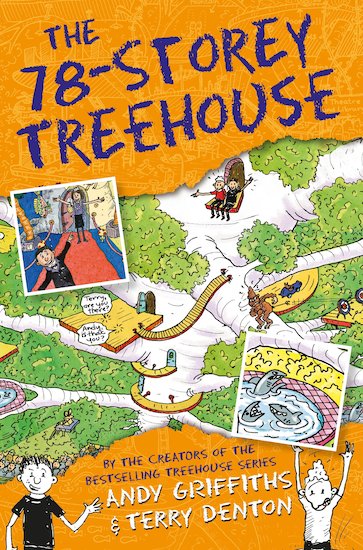 Part of the following packs:

The 78-Storey Treehouse is the sixth book in Andy Griffiths and Terry Denton’s wacky treehouse adventures, where the laugh-out-loud story is told through a combination of text and fantastic cartoon-style illustrations.

Join Andy and Terry in their 78-storey spectacular treehouse (it used to be 65 storeys, but they keep expanding!) They’ve added thirteen new levels including a drive-thru car wash, a combining machine, a scribbletorium, an ALL-BALL sports stadium, Andyland, Terrytown, a high-security potato chip storage facility and an open-air movie theatre with a super giant screen . . . which is a very useful thing to have now that Terry’s going to be a big-shot movie star!

After Andy gets cut out of the movie, he and Terry have a big fight and decide they don’t want to be best friends anymore. But with a herd of sneaky spy cows out to steal all their story ideas, can Andy and Terry make up before it’s too late?

Well, what are you waiting for? Come on up!