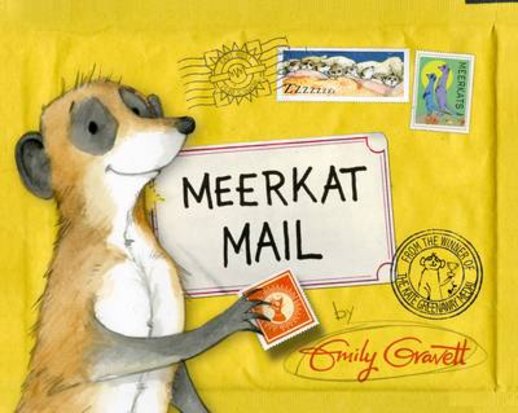 Buy this and your school gets £1.40 to spend on books Orders of £20 or more will earn 20% of your order value back in Scholastic Rewards for your school.

Meerkat Mail is a brilliant picture book from Emily Gravett, the winner of the Kate Greenaway Medal. It has wonderfully detailed, witty artwork and a giant, glossy postcard flap to lift on every spread. Perfect for fans of The Jolly Postman – and meerkats!

Sunny the meerkat lives with his enormous family in the Kalahari desert. They are all very close . . . so close, in fact, that one day Sunny decides it’s just too crowded and packs his bags. He’s off to visit his mongoose cousins. But from the watery world of the Marsh Mongoose to the nocturnal lifestyle of the Malagasy Mongoose, Sunny just doesn’t fit in. And who’s that shadowy figure who seems to be following him around?

There’s so much to enjoy, from the newspaper cuttings on the endpapers to the wittily accurate information about each mongoose species Sunny visits on his journey. With seven giant glossy postcards attached to the pages, this beautiful book is rich with comic detail and will keep any child entertained for hours. 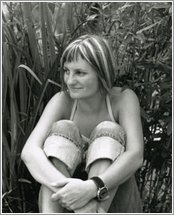 Emily Gravett is a graduate of Brighton University and winner of the 2004 Macmillan Prize for Illustration. Wolves, her first picture book was published in August 2005 and marked the beginning of an internationally stellar career creating extraordinary books for children including Orange Pear Apple Bear, Meerkat Mail and Matilda’s Cat. Her most recent picture book to be published by Macmillan is Little Mouse’s Big Book of Beasts, the hotly anticipated follow-up to Little Mouse’s Big Book of Fears. Emily has also illustrated Cave Baby which was written by the former children’s laureate Julia Donaldson.

Wolves was received with great acclaim across the children’s book world, winning many prizes including the prestigious CILIP Kate Greenaway Medal. In 2007, Emily won the Best Emerging Illustrator Award at the Booktrust Early Years Awards for Monkey and Me and the bronze award in the 6-8 category at the Nestle Children’s Book Prize for Little Mouse’s Big Book of Fears. In 2008 Emily was awarded her second CILIP Kate Greenaway Medal for Little Mouse’s Big Book of Fears.

Emily was born in Brighton. She left school with few qualifications and spent 8 years living on the road (in a variety of vehicles including a truck, caravan and RAF petrol bus called Toby Diesel) before settling back in Brighton and getting a place on the BA (Hons) Illustration course at Brighton University. She lives in Brighton with her daughter Oleander, partner Mik and their two dogs Otto and Edie.